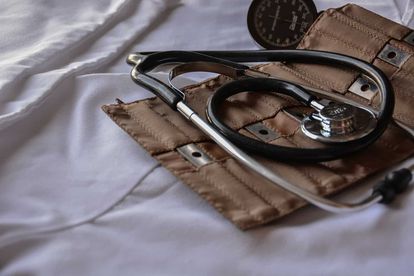 Libode is a small town of 5000 inhabitants in the Eastern Cape province of South Africa. According to The Daily Dispatch, the Nkanga clinic is one of eight NHI facilities in the OR Tambo district and one of five multimillion-rand clinics that are set to be opened in November, by the provincial health department.

How the clinic has evolved

The villagers’ facility has evolved from homestead rondavels to temporary structures.

The residents described the new R28m project as their mini-hospital, saying it would go a long way in improving their lives. They said the construction was a relief since their previous clinic was in a dire state.

Manjilo Craig said their old structure would sometimes run out of medicine, which led to patients being turned away.

“We don’t have any hassles now when we visit the new clinic. There’s directions for where one needs to go, in order to get the required service, unlike before,” Craig said.

She said they now have to wake up early to queue because villagers from other areas flock to their well-equipped .

Khuliswa Sonjica said on rainy days they would have queued outside and got drenched.

“This one is well-equipped and we are happy. We even have waiting rooms. We always struggled to get an ambulance to come to this area, but now we have one here at the clinic,” she said.

AmaMpondo aseNyandeni, King Mangaliso Ndlovuyezwe Ndamase praised the government for its effort in bringing services to the people in remote areas.

“It’s hard for us as motorists to go to town because of the state of the roads here. It was even harder for the villagers. This clinic is in a perfect location,” Ndamase said.

The other four NHI pilot spaces to be opened in the district are Nolitha in Libode, and Gengqe, Sakhela and Luthubeni in King Sabata Dalindyebo municipality.

Health MEC Sindiswa Gomba said the clinic complied with the standards of the NHI.

She said it was equipped to deal with HIV and Aids, TB and mental problems among other services.

“What is important is that our people get the help they need.Our clinics normally have staff shortages. However there is no shortage at this one, it has management, cleaners and everybody,” Gomba said.

“This clinic will lay to rest the worries residents had before, of medicine running out. The dispensary is well stocked and that is how NHI clinics need to operate,” added Gomba.

President Cryil Ramaphosa opened the Lusikisiki village clinic, and Health Minister, Dr Zweli Mkhize opened the Maxwell and Lotana clinics in September 2019 as part of the pilot for NHI.