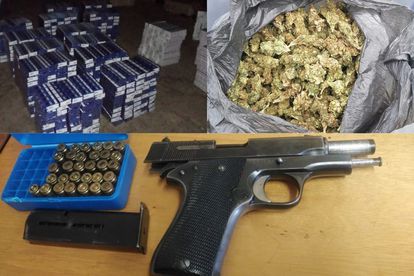 Police operations over the last seven days in Limpopo led to the arrest of 1718 suspects and the confiscation of mountains of evidence. Photos: Supplied

Police operations over the last seven days in Limpopo led to the arrest of 1718 suspects and the confiscation of mountains of evidence. Photos: Supplied

Between 17 to 24 April, police across Limpopo apprehended 1 718 suspects for a myriad of criminal offences from possession and dealing drugs to murder and sexual offences. Much like the nature of their crimes, the ages of the suspects varied between 20 to 63 years of age.

THOUSANDS OF LITRES OF ALCOHOL AND DRUG STOCKPILES

“The suspects were charged with offences including possession of illicit cigarettes, possession and dealing in drugs, possession of unlicensed firearms and ammunition, murder, attempted murder, robberies, burglaries, theft of a motor vehicle, sexual offences, stock theft, fraud, arson and Contravention of the Road Traffic Act,”

THE SUSPECTS DID WHAT?

On 24 April, police were on operation at Moletlane village when they arrested two suspects aged 38 and 63 for bribery, resisting arrest, possession and dealing with dagga. Police recovered dagga at a street value of R7 000.

A 27-year-old suspect was arrested for possession of a stolen motor vehicle on 23 April at the R101 road in Westenburg policing area.

A suspect aged 41 was nabbed on 21 April at Jane Furse for an armed robbery case that occurred during January in the Mecklenburg policing area. Allegedly, the police received a tip-off and reacted to the information resulting in the arrest of the suspect.

The Police in Hlogotlou arrested a 32-year-old suspect, on 20 April at Vleesboom for possession and dealing with illicit cigarettes. During the arrest, officers seized 41 cartoons of Remington Gold and two cartoons of other illegal cigarettes.

Members of the Limpopo Highway Patrol arrested a 21-year-old suspect aged possession of an unlicensed firearm and ammunition at Malatane village in Lebowakgomo. The suspect allegedly owns a spaza shop in the area and threatened his customers with the firearm.

Two suspects aged 20 and 30 were arrested for possession of a hijacked Toyota Corolla on 17 April at Tshivhilidulu village in Siloam policing area. Police received information about the suspects who were driving a hijacked motor vehicle.

JUSTICE TO TAKE ITS COURSE

Lieutenant Colonel Ledwaba says the suspects arrested during the operations are expected to appear before different magistrate courts throughout Limpopo in due course.

The police investigations are still ongoing.