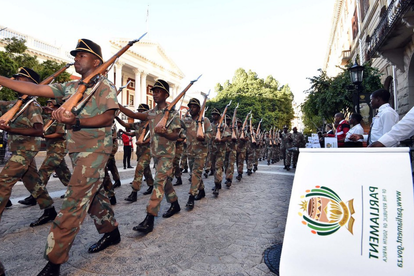 The Special Forces School in Murrayhill, Pretoria have been crippled by nearby civilians. Nearby residents in the encroaching settlements are allegedly stealing electrical cables and destroying water pipes from the military base.

The startling revelation was made on Saturday, 23 April, following the conclusion of an oversight visit by the Parliamentary Portfolio Committee on Defence and Military Veterans.

The school in the north of Pretoria bemoaned their struggles to the delegation, with one of the major concerns being the encroachment of civilians.

Communities have built homes and structures too close to the perimeter of the military base. Due to the close proximity, residents from these informal settlements have been allegedly stealing electrical cables and are the reported cause of the destruction of water pipes that supply the school.

Visiting committee members were told how the military base had resorted to using its own funds, the school uses generators to keep the lights on and has had to instal JoJo tanks to collect rainwater for use.

The school trains its operatives to be combat-ready for deployment anywhere in the country within a short space of time.

Acting committee chairperson Thabo Mmutle said it had since recommended the installation of boreholes as a water source.

On the issue of electricity, the committee believed the challenges can be addressed if the school also looked into investing in solar power. This would allow the military base to ensure its operations are not solely dependent on the national grid.

The committee also recommended that the school writes to it and state exactly the kind of support it requires.

Mmutle added that the issue could not remain an ongoing hindrance to the military establishment.

“There must be a clear decision from the command council in terms of the lands surrounding the bases,”

The South African National Defence Union has also asked that a deployment operating 24/7 be stationed at the military base to guard the base and prevent future issues.