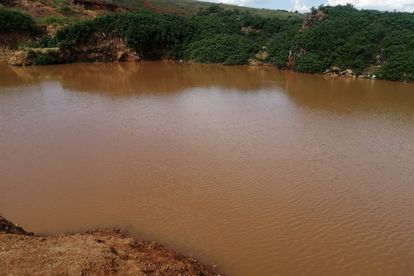 A decomposed body was found in Avoca, KZN.
Photo: ER24

A decomposed body was found in Avoca, KZN.
Photo: ER24

A naked decomposing body of an unidentified person was discovered embedded in the bank of the Umhlangane River in Avoca, KwaZulu-Natal (KZN) on Saturday.

A scrap collector reportedly made the grim discovery.

Members of Reaction Unit South Africa (RUSA) were reportedly called out to the area in the afternoon after a scrap collector approached a passerby and informed him of the discovery.

On arrival, the scrap collector led RUSA Members more than 500 metres through dense vegetation until they reached the location of the body which was in a prone position and partially exposed along the river bank.

“The sex or race of the deceased could not be confirmed due to the extent of the decomposition. The South African Police Service (SAPS) Search & Rescue Unit were called out to recover the body.”

Police in the Free State opened a murder investigation after partly burnt remains of an unknown person were found at the roadside on Wednesday, 27 April.

Warrant Officer Mmako Mophiring said officers received and attended to a complaint on the R712 near Hatsoanyane Farm on Wednesday.

The body reportedly belongs to an unknown African person believed to be around 32 years of age.

Mophiring said the deceased had multiple stab wounds to the face and upper body and was partly burnt.

A murder case has been opened for investigation by the Phuthaditjhaba police station.

Members of the public with information about the deceased’s family or relatives are encouraged to contact the investigating station at 072-564-3200 or Crime Stop 08600-10111.

‘Might as well be naked’: Bikini bottoms cause quite a stir online