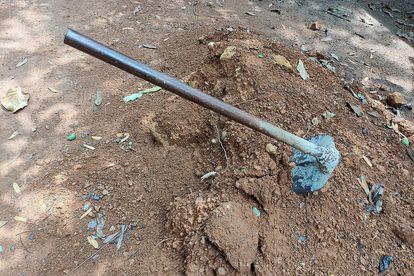 Shakwane Muzi, 38, appeared in the Bushbuckridge Magistrate’s Court on Monday, 22 August, after he allegedly murdered a man and attacked a woman over the weekend.

South African Police Service (SAPS) spokesperson Brigadier Selvy Mohlala said the accused reportedly caught his girlfriend in the house with another man in Mpumalanga on Friday night at approximately 20:00.

It is alleged that the woman and the other man were also in a relationship. An argument broke out between the three and Muzi allegedly assaulted his girlfriend and the man with a brick and hacked them with a garden hoe.

The woman was injured in the attack and transported to a hospital for treatment. The man died of his injuries at the scene. “He has since been identified as Bongani Shabalala from Saselani Trust near Bushbuckridge,” said the police spokesperson.

A case of murder with an additional assault GBH charge was opened at the Bushbuckridge police station on Friday – Muzi was nowhere to be found. However, he handed himself in – in the presence of his lawyer – on Saturday night.

His next court appearance is expected on Monday, 29 August, when he is expected to make a formal bail application. He remains in custody.

“No matter how much one can feel offended, violence is not the way to go and two wrongs do not make a right. People should seek help from social services whenever they come across challenges in their relationships,” said Mpumalanga police commissioner, Lieutenant-General Semakaleng Manamela, condemning the incident.