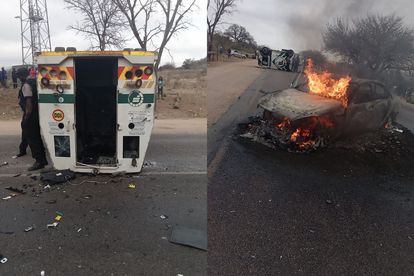 A gang of approximately 10 suspects allegedly robbed a Fidelity cash-in-transit vehicle on Friday morning, 2 September, along the R40 Road in Dwarsloop near Bushbuckridge, Mpumalanga.

When the Mercedes-Benz neared the cash van the suspects drove into it. The head-on collision led to the van spinning out of control and overturning on the road. One of the guards sustained injuries in the crash.

“A group of armed suspects emerged to join the ones in the sedan then allegedly went on and overpowered as well as disarmed the security guards, taking their three rifles together with one handgun,” said Mohlala.

SUSPECTS FLED IN A WHITE BAKKIE

The suspects allegedly detonated explosives thrice to access the money and took bags containing an undisclosed amount of cash from the van.

Once the bags were removed, the cash-in-transit gang set the Mercedes-Benz on fire and fled the scene in a white bakkie, which the guards could not fully describe at the time.

“The Police and other role players were informed about the incident meanwhile the injured guard was taken to hospital for medical treatment.

“Police are investigating the cash-in-transit robbery incident and a team of experts in the field of investigation has been assembled to probe the case. No one has been arrested as yet,” said the police spokesperson.

Members of the public with information that could lead to the suspects’ arrests are encouraged to contact the investigating officer, Detective Lieutenant Colonel Christopher Mashego, at 082-469-1298 or call Crime Stop at 08600-10111.

Mpumalanga provincial police commissioner, Lieutenant-General Semakaleng Manamela, called for a swift arrest of the suspects and said she had confidence in the abilities of the members investigating the heist.

“We hope that members of the public can understand the negative economic implications of such robberies and hopefully as often, they will share such valuable information which can help investigators to swiftly bring perpetrators to book,” said Manamela.