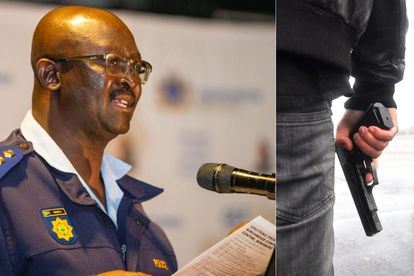 A high number of illegal guns were recovered in Gauteng

Mawela was speaking to Newzroom Afrika following the release of the Gauteng crime statistics. Mawela explained that they have been recovering a lot of illegal firearms as of late.

He spoke about the contribution to the above that is made by Gauteng alone. Mawela said the number of illegal firearms recovered in this space is high. He added that the more illegal firearms they recover, the more come into the province.

Replica or toy firearms are becoming more common in the province

Touching on the topic of replica firearms, Mawela explained that a lot of ‘law-abiding citizens’ are arming themselves with either replica or toy guns.

“But another new phenomenon, which we have just discovered, we find more and more people – I will call them law-abiding citizens – they arm themselves with replica firearms, toy guns. They look like real firearms and when you ask them, they tell you this thing is for protection. People say ‘we don’t feel safe’. Those are law-abiding citizens,”

In around the Joburg CBD, however, Mawela said these replica firearms are commonly used for committing crimes. Going into detail, Mawela explained that those in Johannesburg central use the replica guns to commit street robberies, reports IOL.

Over 30 illegal firearms confiscated in Gqeberha this month

Previously, it was reported that over 30 illegal firearms have been confiscated and removed by the police in Gqeberha following crime prevention operations. According to police spokesperson Colonel Priscilla Naidu, from 1 August to date, police in Gqeberha have successfully removed and confiscated a total of 37 weapons from the hands of criminals.

“Patrolling hotspot areas, tracking movements of known criminals/gangsters and a good informer network contributed to these successes,” she said.

She added that the seizures and arrests were executed this weekend in the Bethesldorp, Kwanobuhle and Kwadwesi policing areas. Read the full story here.