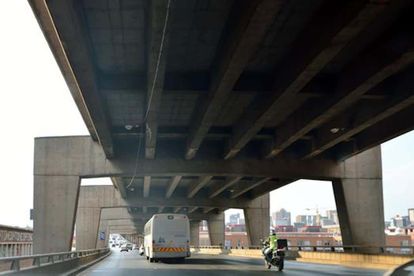 The Gauteng Provincial Legislature’s (GPL), committee on Roads and Transport says the rehabilitation on the M1 bridge appeared to have been a “waste” of public resources, as the recent flooding has proven that the drainage system that was meant to be addressed with the recent rehabilitation, still “does not work.”

The highway’s lower deck flooded during a thunderstorm last week, leading to an outcry on social media as motorists posted video of cars crawling along with water halfway up their sides.

The particular section of the highway in question — where the lower deck of the bridge rises to rejoin the upper deck — has long been prone to flooding, and the Committee now wants answers from the implementing Johannesburg Road Agency (JRA) as to why after millions spent, not once, but twice, the problem still persists.

The recent rehabilitation of the M1 double decker section that took almost two years to complete was at an estimated value of R169 million.

The project scope included the reinstatement and upgrading of the existing storm water drainage system and the stormwater inlet system.

However, the section’s upgrade could not endure the heavy rains that were experienced in Gauteng on 5 October, the committee said.

It has called a meeting with the City to review the project’s expenditure, and did not rule out the possibility of initiating a probe into the matter.

The Committee further noted that this was not the first rehabilitation that sought to address a similar project scope.

In January 2016, R82 million was spent when the very same section of the free way experienced heavy traffic congestions as a result of flash flooding.

Chairperson of the Roads and Transport Portfolio Committee, Dumisani Dakile, said the Johannesburg burg Road Agency (JRA) will have to to account for the unsatisfactory results.

“As a first step, the Committee will initiate a meeting with section 79/80 Committee of City of Johannesburg where the Johannesburg Road Agency can present amongst others, the actual  expenditure, closing report of the project, a way forward and  possibly where appropriate, request a probe into the project. “

The JRA has since placed the head of its regional operation department on temporary suspension while it investigates the matter, but has not provided further details, Timeslive reported.