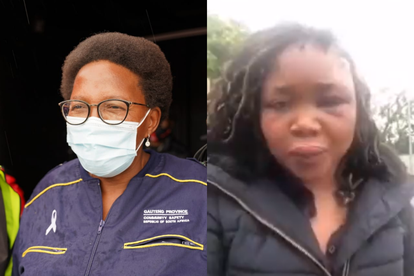 The MEC has stepped in after the video gained traction on social media. Image: Twitter/ @FaithMazibukoSA, Twitter/ @kulanicool

The MEC has stepped in after the video gained traction on social media. Image: Twitter/ @FaithMazibukoSA, Twitter/ @kulanicool

Gauteng MEC Faith Mazibuko has stepped in after a woman took to social media with an alarming claim against Silverton police officials. In the video, the distressed woman can be witnessed with a swollen eye pleading for assistance.

“My abuser is roaming on the streets as we speak. The police did nothing, nothing, to help us. When we walked in here they were groveling to him like a king.”

Snippet from the controversial video

In fact, the woman pleaded with SA ministers, including Bheki Cele, to assist her in bringing her alleged abuser to justice.

The video quickly went viral as citizens jumped in to draw attention to the situation. Evidently, the publicity has indeed garnered the attention of the authorities.

MEC commits to ensuring action is taken over incident

“He has assured me that he is dealing with it. I’m sad that the lady had to resort to doing this video for her matter to receive the attention it deserves.”

Furthermore, Mazibuko committed to ensuring that action is taken on the matter.

Additionally, the SA Police Service has responded to the situation in a statement issued on Monday.

Brigadier Brenda Muridili confirmed that the woman had opened a case of domestic violence and assault at the Silverton station.

In turn, Muridili explained that the suspect had been arrested and then transferred for further investigation.

“The Detective in Mamelodi who was allocated the case then charged the 46-year-old suspect with assault and then released him on a warning to appear in court on 30 December 2021.”

The confusion seems to have resulted from the Mamelodi Police Station being closed for COVID-19 decontamination. As a result, the station had been operating from the back entrance as a result.

“The Station Commander Brigadier Matji, has apologised for any inconvenience caused with regards to the closing of the police station and he has committed to ensuring that the next time the station has to be decontaminated, there will be clear and visible signage to direct clients to the place where the Community Service Centre will be operating.”

In conclusion, Muridili confirms that an investigation has been launched to deal with the officer in question in an effort to ensure no foul play had transpired.

“The Station Commander has also instituted an internal disciplinary investigation into the detective member that released the suspect on warning and failed to liaise with the complainant.”

*Update: The suspect has since been rearrested according to a statement posted by the MEC.