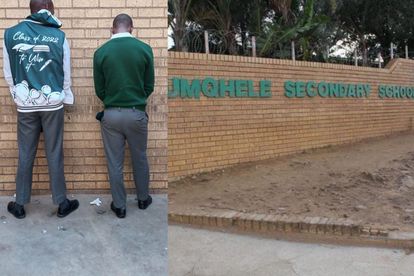 Two matric boys have been apprehended after they were caught stealing their school’s property this morning, Tuesday, 20 September.

MATRIC BOYS BEHIND BARS FOR STEALING

These matric boys from Umqhele Secondary School were found in possession of critical equipment to enable teaching and learning in school.

Ivory Park SAPS Communications Officer Captain Ben Matimulane said the management of the Ivory Park SAPS has welcomed the arrest this morning of two learners from the Umqhele Secondary School for theft of school property.

WHAT DID THE ARRESTED LEARNERS STEAL

“The two learners, both in Grade 12, were picked up by Ivory Park SAPS’s sector managers and were found in possession of the school’s overhead projector and a vehicle alternator, all of which are being used during different phases of learning,” he explained.

This somewhat breakthrough follows concerns about burglaries in schools in the area.

“Burglaries at schools are problematic in our policing precinct and are jeopardising the learning process of other learners.”

ALSO READ: Motshekga concerned about theft and vandalism at schools

The two suspects, aged 19 and 20, are reported to have found a way to the key to the school’s workshop and duplicated it (cut it), thus gaining easy entry into the workshop and the stealing the items.

“This arrest will surely send a strong message to others with similar tendencies that they will be arrested as well,” said Brigadier David Mbongeni Ngcobo, the station commander of the Ivory Park SAPS.

THE GRADE 12 PUPILS SET TO APPEAR IN COURT

The matric boys are expected to appear in the Tembisa Magistrate’s Court tomorrow, Wednesday, 21 September to face a charge of burglary.

Meanwhile, another duo in high school is facing a much more serious offence. This after the two minors were nabbed after being linked to the brutal attack of a Sir Pierre van Ryneveld High School learner who succumbed to his injuries.

The two learners aged 16 and 17 are facing a charge of murder; however, their matter is being handled with sensitivity due to their age.