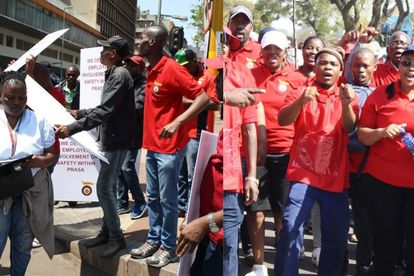 The South African Transport and Allied Workers Union (Satawu) is threatening strike action on Monday, 10 October with as many as 21 000 workers expected to take part unless a new wage deal is struck with Transnet, the state owned transport and logistics group.

Satawu, along with the United National Transport Union (Untu), have already rejected an initial 1.5% offer and a revised offer of 4% and promise “to plunge Transnet into industrial action that could have serious repercussions for the economy,” reported the Sunday Times.

The unions said that the offer must be aligned with the rising cost of living and current inflation with the annual inflation in South Africa currently at 7.6%, according to BusinessTech.

The strike action threatens to curb trade in materials including coal, iron ore, chrome and manganese because the company’s rail and ports network is key to South African exports of bulk commodities, reported Bloomberg.

The South African ports are also crucial for shippers from other African countries, it added.

Transnet moved to declare a force majeure at its ports in anticipation of some of its operations being “scaled down,” the state-owned company said in a notice to its customers.

As a full-blown strike seems unavoidable at this stage, Transnet warned a strike would have a serious effect on the economy and implored the unions to reconsider, the Sunday Times said.

On Monday, the parties will meet at the Commission for Conciliation Mediation and Arbitration (CCMA), which has been brought in to try to broker a solution through meditation.

Satawu said it will not accept anything below two digits but is still open to talks.

“We have served Transnet with a 48-hour notice of our intention to strike, and our strike starts Monday. The company requested a meeting with us last Tuesday, where they tabled their so-called revised offer of 4%. This offer is divided into two – a 3% across the board increase and one percent in the form of a lump sum equivalent to R7 600,” secretary-general Jack Mazibuko told the Business Times.

“We took this offer to our members for a mandate, but it was strongly rejected, and that’s why we are here now.”