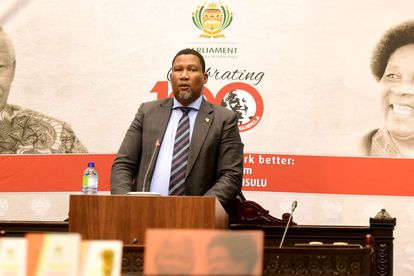 Mandla Mandela the eldest son of former president, Nelson Mandela, has called for the release of the AbaThembu King Buyelekhaya Dalindyebo.

Note: Follow our live coverage of the 2019 general elections here.

As reported by EWN, Mandla joined millions of South Africans who, irrespective of the cold and wet weather that’s fallen in most parts of the country, went out in droves to cast their votes for a new leader.

Why is King Dalindyebo in prison?

Dalindyebo was, in December 2015, convicted to 12 years in prison for assault, kidnapping, arson, and attempting to defeat the ends of justice.

This was for his direct involvement in the torching of homes belonging to a group of people who he was apparently disciplining. He was also accused of administering corporal punishment and the kidnapping of a man’s family.

Mandla is the latest influential figure in the Eastern Cape to show his support for the call of Dalindyebo’s pardon.

Minister of Justice and Correctional Services, Michael Masutha had, in April, submitted recommendations on the state of the AbaThembu king’s prison term.

It was confirmed that Masutha was in favour of the king’s pardon, a sentiment that has been used as an ultimatum by traditional leaders in the Eastern Cape to coerce the ANC leadership into conceding to the demand.

Related: King Dalindyebo: Will President Ramaphosa give-in to the pressure?

Ramaphosa has not yet made up his mind about the whole situation. When asked recently, he indicated that he would make his decision after he had considered the entire scope of Masutha’s recommendations.

While the country waits in anticipation for the president to make up his mind on the matter — bearing in mind that by the time the matter has been concluded, he may no longer be South Africa’s head of state — Mandla has his hopes on the return of their king.

“We hope that the application will be given all the necessary attention that it requires. We as the AbaThembu nation look forward to his return,” he said.