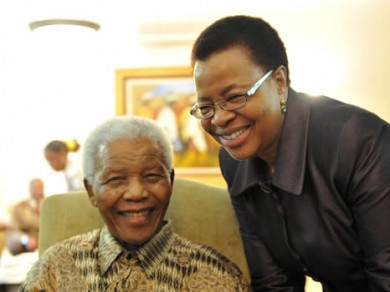 Former South African president Nelson Mandela’s wife GraÃ§a Machel has thanked South Africans and people all over the world for the messages of support to the world icon who is being treated in a Pretoria hospital for a lung infection.

â€œSo much love and generosity from South Africans, Africans across the continent, and thousands more from across the world, have come our way to lighten the burden of anxiety; bringing us love, comfort and hope,” Machel said in a statement.

The messages were in the form of letters, by SMS, by phone, by twitter, by Facebook, email, cards, flowers and the human voice, in particular the voices of children in schools or singing outside Madiba’s home.

Machel quoted her husband, who once said, “What counts in life is not the mere fact that we have lived. It is what difference we have made in the lives of others.”

â€œWe have felt the closeness of the world and the deepest meaning of strength and peace. Our gratitude is difficult to express. But the love and peace we feel give yet more life to the simple Thank you!”

“I have thought of his words on each occasion the world stood with him, making a difference to him, in his healing,” she said.

“We continue to appeal to people to keep Madiba in their prayers and wish him a speedy recovery,” said President Zuma.

Since the former President — who turns 95 next month — was hospitalised, the Presidency said in updates on his health that he was in a serious but stable condition, and restricted visits to close family and relatives because he was in intensive care.

Local and international media houses have been camping outside Mandela’s home in Houghton while some have been stationed outside the hospital.