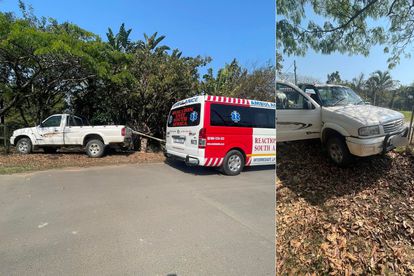 A 42-year-old man was run over by his own bakkie after attempting to stop it from rolling. Photo: Reaction Unit South Africa / Facebook

A 42-year-old man was run over by his own bakkie after attempting to stop it from rolling. Photo: Reaction Unit South Africa / Facebook

A 42-year-old man sustained moderate injuries after being run over by his own bakkie.

Where did the incident happen?

Reaction Unit South Africa (RUSA) revealed that their medics were returning from an emergency at around 11:54 on Friday. They were informed about the terrible incident by the 42-year-old man’s friend.

How did the 42-year-old man get run over by his own bakkie?

RUSA stated that the driver of the white Mazda bakkie was visiting a friend. He parked his bakkie on the side of the road. While walking to his friend’s house, the man realised his vehicle was rolling.

The man then attempted to stop his bakkie from rolling and was run over instead. RUSA stated that he sustained injuries to his chest and back.

“He suffered injuries to his chest and back and was transported to hospital by ambulance,” said RUSA.

Meanwhile, it was reported that a teenager lost his life after being killed in a hit-and-run accident this evening, Friday, 2 September. According to Reaction Unit South Africa, a 14-year-old teenager was killed on the P100 in Ndwedwe, north of KwaZulu-Natal (KZN).

“Members of Reaction Unit South Africa (RUSA) were called out to the scene at approximately 19:28 by passing motorists requesting assistance for the injured boy,” the company reported.

Reaction Officers and Reaction Unit South Africa medics were immediately dispatched to the location provided and on arrival found paramedics from the Provincial Ambulance Service in attendance. The 14-year-old teenager suffered life-threatening injuries and passed away prior to the arrival of First Responders.

“It was established that he was struck by a white Toyota Quantum (registration unknown) that was travelling at a high rate of speed.” Read the full story here.