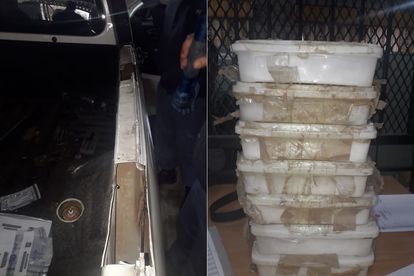 A 36-year-old man has been arrested and around R3 million worth of tik was confiscated by the SAPS. Photo: @SAPoliceService / Twitter

A 36-year-old man has been arrested and around R3 million worth of tik was confiscated by the SAPS. Photo: @SAPoliceService / Twitter

The Western Cape South African Police Service (SAPS) arrested a 36-year-old man. The man was found to be transporting drugs with a street value of around R3 million. He was travelling along the N1 in Prince Albert.

The unnamed individual was stopped during a roadblock on Friday, 20 May. Spokesperson for the SAPS in the Western Cape Sergeant Christopher Spies said officers discovered that one side of the man’s vehicle had been tampered with.

Police opened the side and found a concealed compartment.

“Upon further investigation, they opened the side and discovered a concealed compartment with seven hidden Tupperware containers filled with what is believed to be Tik. Police confiscated the 8,64kg of Tik and arrested the driver,”

The man was also found to have at least R13 000 in cash. It is believed that the money is proceeds of the drug trade and this was also seized by the SAPS.

“Preliminary investigation indicates that the consignment was destined for delivery at De Doorns in the Boland,”

A 36-year-old man was found in possession of drugs valued at around R7 million. South African Police Service officers from the Provincial Drug and Firearm Unit conducted an observation at a block of flats in Umhlanga, Durban.

The suspects were found packing and transporting drugs in Umhlanga and surrounding areas. The information was confirmed and police obtained a search warrant at a court. On 14 April, at 18:15, police put an operation in place.

SAPS members made their way to the flat in Umhlanga Ridge. A 36-year-old male was found at the premises. He was reportedly packaging drugs. The man was placed under arrest by SAPS for the possession of drugs as well as dealing in drugs. Read the full story here.

A George woman has been arrested on the N9 after police confiscated drugs worth R120 000 that were concealed in oats boxes on Wednesday, 16 March.  Rural Flying Squad members were conducting a vehicle checkpoint between George and Oudtshoorn.

They pulled over the taxi and proceeded with a search of the vehicle when a member of the group detected that the Jungle Oats instant porridge boxes were tampered with. When they opened these boxes, members discovered the mandrax tablets and tik stashed inside it.

Spies said Western Cape police management lauded the Rural Flying Squad members for their actions which ensured that those who threaten the safety of society are brought to book.  Read the full story here.