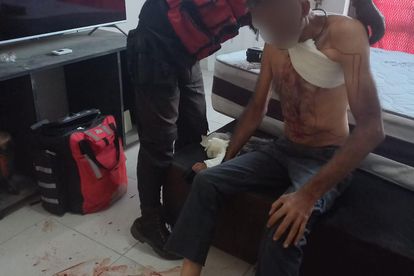 A man was BRUTALLY stabbed when robbers attacked him in his house in Tongaat, KZN.

THE MAN WAS STABBED IN HIS CHEST AND FOOT

“A 48-year-old man was injured after robbers climbed up the scaffolding to his first-floor apartment and stabbed him during a home invasion on Railway Street in Tongaat – KZN.”

Balram said members of Reaction Unit South Africa (RUSA) were dispatched to the scene at approximately 05:54 after receiving reports of the incident.

ROBBERS USED THE SCAFFOLDING TO GET ONTO THE BALCONY

“On arrival, the man was found bleeding excessively from two stab wounds. He explained that he woke up to the sound of his bedroom door opening.

“An unknown male armed with a large knife jumped on him when a scuffle ensued. The two wrestled from the bedroom to the living room.”

It is believed the suspect called out to an accomplice to assist him; however, he remained on the balcony and did not enter the flat.

Balram said the man also screamed for assistance which scared off the suspects.

“They fled with his wallet, Samsung cellphone and house keys.”

THE MAN WAS BLEEDING EXCESSIVELY

The man was stabbed in his chest and foot during the scuffle.

“The injured man was stabilised on the scene before being transported to hospital by ambulance.”

Meanwhile, a municipal worker was stabbed in his face, and his cheek was partially torn off during a robbery.

“An Ethekwini Municipality employee was seriously injured after he was stabbed in the face during a robbery in the Verulam CBDin KwaZulu-Natal on Thursday.”