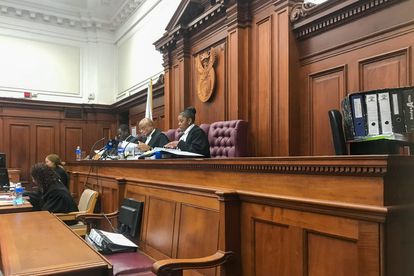 Judges Thulare, Lekhuleni and Nziweni in the Cape Town High Court on Monday, 30 May. Photo: Storm Simpson / The South African.

Judges Thulare, Lekhuleni and Nziweni in the Cape Town High Court on Monday, 30 May. Photo: Storm Simpson / The South African.

Zandile Mafe’s bail appeal re-application was heard by a full bench of judges in the Cape Town High Court on Monday, 30 May.

The bail appeal was first heard by Judges Daniel Thulare and James Lekhuleni on 25 April.

The pair reserved judgement on that day. On Monday, Lekhuleni told the court that the Judge President committed to a full bench after the court reached a split decision.

Judge Constance Noluthando Nziweni was the third presiding officer on the bench.

Lekhuleni told both the State and defence that they weren’t expecting to sit through a marathon argument again as they’ve all read the record.

Before he got stuck into his argument, Mpofu said the split decision was something to be welcomed.

“There’s unanimity which happens sometimes and it’s worrisome,” he said.

Mpofu said the crux of this case was that the Magistrate in the Regional Court “misinterpreted” the importance of the so-called confession Mafe allegedly made in the wake of his arrest.

“The court will remember that the learned magistrate had played open cards and made it clear what was the central issue of her concern.

We will demonstrate today that that basis was wrong,” he said.

Mpofu again argued that the alleged confession given by Mafe was induced – according to the appellant – and it was not worth the paper it was written on as it was taken after he was preliminarily diagnosed with paranoid schizophrenia by Dr Zelda van Tonder.

He said that if Magistrate Michelle Adams grounded her main finding on the wrong factual basis when denying bail, the judgement must be wrong. He asked the court to reduce the issue to its bare bones.

The “main finding” Mpofu is referring to is the consideration Adams gave to the alleged confession and other evidence submitted by the State.

He said although Adams wrote in her judgement that Mafe failed to prove exceptional circumstances that permitted his release on bail.

According to Mpofu, the real reason was the hunger strike the appellant went on supposedly proves how “bloodthirsty” and determined to achieve his goals he is.

STATE SAYS IT WAS RIGHT TO DENY BAIL

He said if the High Court finds that the Regional Court’s value judgement was correct – in that there are no exceptional circumstances – then the higher court cannot interfere in this matter.

Menigo pleaded with the bench to look at the totality of the evidence – as opposed to Mpofu who honed in on a single aspect. The prosecutor believes the correct decision was reached.

Menigo also said that the State’s case was based on much more than the contentious confession. He said there was the pointing out where Mafe allegedly showed the police where he bought petrol in Bellville before making his way to the city and infiltrating the parliamentary precinct.

Another factor was the 30 hours of footage that allegedly shows the appellant preparing for the blaze by using paper and petrol before setting both the Old and New Assembly alight.

The prosecutor revealed that the person on the footage allegedly tried to enter Tuynhuys first but failed.

Menigo said the parliament fire was an act of violence perpetrated against the people of South Africa.

“To personally witness the destruction of parliament is traumatising to watch as a South African,” he said.

He asked the bench to consider that releasing Mafe on bail could jeopardise public safety and offered that the incident could not be viewed in isolation from “all the events that are taking place in our country.”

He went further and said the refusal of bail, initially, was the correct one as it instilled public confidence in the justice system.

The court gave its orders but the reasons for the judgement will be provided to both parties in due course.

Lekhuleni, who was offered a dissenting judgement in opposition to the majority, said he would have granted bail given certain conditions.

Mafe’s lawyer, Luvuyo Godla, told reporters that the matter was far from over and that the defence would appeal to the highest court of the land.