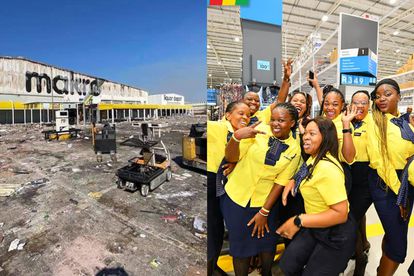 Jubilation by employees as Makro in Pietermaritzburg returns to business after the July unrest. Photo: Makro SA/ Facebook.

Jubilation by employees as Makro in Pietermaritzburg returns to business after the July unrest. Photo: Makro SA/ Facebook.

Makro in Pietermaritzburg which was looted and vandalised during last year’s July unrest has reopened just in time for Black Friday.

MAKRO IN REINVESTS IN PIETERMARITZBURG

The massive warehouse club reopened yesterday, Wednesday, 23 November after closing down for over a year.

“Our Makro Pietermaritzburg store reopened [today]! Come visit us at our new location and experience our brand new store with Black Friday deals. We can’t wait to see you. See you there.”

This celebratory occasion was attended by Msunduzi Municipality Mayor Mzimkhulu Thebolla and the Deputy mayor who welcomed the reopening of the Makro store in the city.

“Stronger and bigger return with fresh produce market. Growing the city of choice together – Economically and Socially,” the city reflected on the achievement.

THE CAUSE OF THE 2021 JULY UNREST IN THE COUNTRY

The 2021 July unrest which was influenced by politics and sheer criminality broke out in KwaZulu-Natal and Gauteng leaving a trail of destruction and casualties in the process.

In Pietermaritzburg, Makro became one of the major outlets that were targeted by locals who looted appliances, beverages and groceries before setting parts of the warehouse alight.

Instantly hundreds of jobs were lost and Makro was left counting its losses.

The losses in KwaZulu-Natal were estimated to over R30 billion while the country suffered over R50 billion in economic losses.

During Zikalala’s oversight visits, he indicated that some centres had begun rebuilding such as Bridge City, Springfield Value Centre and Edendale Mall in Pietermaritzburg, which was reopened today, Thursday 24 November.

Mayor Mzimkhulu Thebolla, who was accompanied by Councillor Ntombizethu Sokhela (Chairperson Local Economic Development Committee), and Councillor Thembinkosi Zondi of ward 22, expressed his appreciation for businesses that continue to believe in the city and have returned after last year’s unrest.