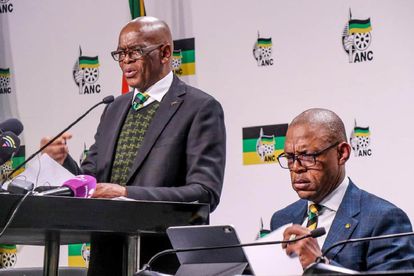 Supporters for the African National Congress (ANC) Secretary-General Ace Magashule have vowed to stand by him, further questioning the charges he faces. The supporters descended on Bloemfontein and held a night vigil on the eve of his appearance in the Bloemfontein Magistrate’s Court.

Magashule will be in court over charges related to a controversial R255 million asbestos contract awarded in 2014, when he was still premier. He will first hand himself over to the Directorate for Priority Crime Investigation (DPCI), also known as the Hawks.

Speaking to eNCA, ANC councillor from Welkom Victor Morris charged that the allegations have been levelled without any proof.

“I am here in my personal capacity to come and support him (Magashule) on the charges of corruption against him…Comrade Ace Magashule has always maintained he wants his day in court and remember, you are innocent until you are proven guilty in a court of law. Too many people have said ‘comrade Ace this’ and ‘comrade Ace that’ but nobody has any proof that he has been involved in any corruption,” he said.

Morris further said Magashule should not be the one to take the fall for the failed government project. He has questioned why the authorities have zeroed in on Magashule.

“People are talking (about) him not playing his oversight role as the premier by then…but he was not alone, there was the Provincial Executive Committee (PEC) that he has worked with. Why are they isolating him,”

Carl Niehaus: ‘We want to bring a message of unity’

Another vocal supporter of Magashule, UmKhonto weSizwe Military Veterans Association spokesperson Carl Niehaus, was also at the night vigil. Niehaus said they were concerned about Magashule’s arrest creating divisions within the ruling party.

“What we are faced with here is that ANC structures are speaking and they are saying we want to be here because we want to have a demonstration for unity in the ANC. We are concerned that this warrant of arrest against the secretary-general can cause division. We want to bring message of unity,” he said.

“We are not here to try and be in defiance of anyone, but at the same it is our right as members of the ANC and members coming from structures representing the ANC,”