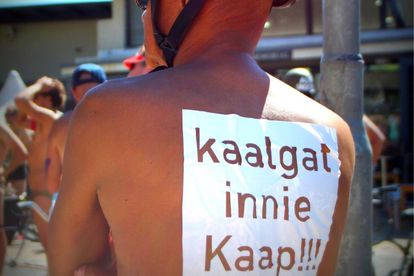 The Naked Bike Ride is in full swing in Cape Town today, and those not in the know are expressing their concern on social media.

So, if you’re confused about what the Naked Bike Ride is, you’ve come to the right place.

Naked Bike Ride: What you need to know

The first-ever World Naked Bike Ride took place back in June 2004 and was the brainchild of a social activist and filmmaker in Vancouver, Canada – Conrad Schmidt.

Schmidt supported Artists for Peace/Artists Against War (AFP/AAW) in the previous year, and the event’s message was protesting against oil dependency.

The purpose of the ride is to “deliver a vision of a cleaner, safer, body-positive world.” The dress code for the event can be summed up in four words: “Bare as you dare”.

It is, indeed, quite a sight to behold. In Cape Town, one lane along Main Road in Green Point is being “obstructed by naked people on bikes”.

The organisers of this year’s event invited participants to join them at 9:00 on 13 March at the Collin Eglin library in Seapoint for the Cape Town event.

The purpose, as explained on Facebook, is to “help to create the change you want in the world”, and what you choose to wear (or not wear) is entirely up to you.

“Dress as you dare to attract attention to a worthy cause to save our planet. Issues like fossil fuel dependency, climate change, consumerism, patriarchal mind control, planet positive, people positive and body positivity”.

Comment on social media has been… varied, to say the least. While some showed their support and enthusiasm, others were confused.

One netizen shared a short video clip of bikers driving past and hilariously captioned it: “Guys, there’s something going terribly wrong in Cape Town”, while news photographer Esa Alexander explained:

“Each year, the event takes place to raise awareness about fossil fuels and protecting planet Earth”.