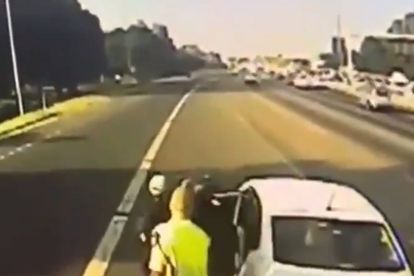 On Friday, 12 March 2021, suspects dressed in metro police uniforms attempted to hijack a truck. The incident was caught on camera on the N3 in Johannesburg.

Video footage of the incident was shared on social media by Yusuf Abramjee. We reached out for clarification and will update this article if feedback is received.

One netizen pointed out that they had also been “stopped by fake police on N3” in the past. The user, known only as Lelo M, said they were “being followed by their sister” and added:

“Lucky I was being followed by my sister and her friend so they got shocked when they pulled us and two cars pulled over behind us”.

Another said the area “really looks familiar,” and recalled seeing police officers in the past stop trucks at this stretch of the road. A third netizen pointed out that the uniforms were fake:

“Definitely fake traffic officers! One is wearing Gauteng Traffic Police reflector jacket and the other one EMPD”.

The target was a truck carrying a consignment of cellphones with an estimated value of about R60 million. According to SAPS Brigadier Mathapelo Peters:

“It is reported that members of the HP were approaching when suspects started firing shots at them, to which the team retaliated and returned fire,” said Peters.

A total of 14 suspects, including two women, were arrested while an unconfirmed number of suspects escaped by jumping the walls.

Furthermore, “other members who were strategically positioned outside the house gave chase and five more suspects were cornered and arrested at five different scenes in close proximity” to the crime scene.