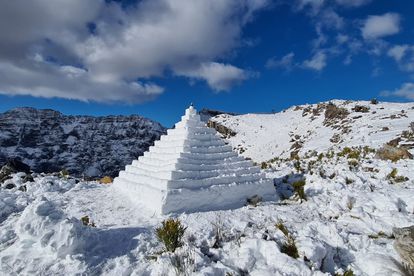 It took a young man from the Western Cape and his friends more than five hours to build yet another amazing igloo at the Perdekop hiking trail at Mont Rochelle Nature Reserve in Franschhoek on Saturday.

Wilroux Ackermann said this was the third igloo he has build during snowfall in South Africa in the last two years.

“We started building this igloo just before 10 am, and it took us more than five hours to complete.”

Wilroux had a team of friends helping him.

The team consisted out of his sister Lenchen-Marié Ackermann, Richard Smith, Donovan Oliveros, and Nicol Oliveros.

Several parts of South Africa were covered in snow this past weekend as an intense cold front made its way to the Cape provinces, KwaZulu-Natal, and Lesotho on Saturday.

Wilroux said they decided to head out to the Perdekop hiking trail at Mont Rochelle Nature Reserve in Franschhoek on Saturday as that area already had heavy snowfall on Friday.

Wilroux said a total of 366 ice blocks were made and used in the building of this igloo.

In July this year, Wilroux became an instant internet sensation when he and his sister attempted to build an igloo in Franschhoek.

ALSO READ: Watch: This amazing Igloo was built during snowfall in Western Cape

South Africans experienced snowfall for the fourth time in the space of two months over the past week, and people could not wait to get outside and start playing.

Several roads were blocked with traffic on Sunday as snow seekers went out to play in the snow.