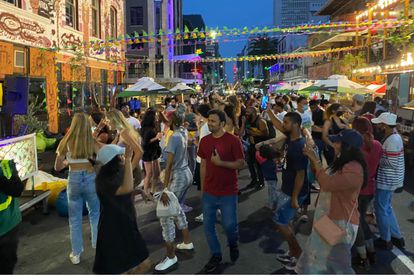 Long Street. It’s known as the biggest party street in Cape Town. You can have a wonderful night there (think pre-pandemic) but it’s also not always the SAFEST place to be walking around by yourself. Soon after Geordin Hill-Lewis took office as the city’s new mayor, he began a pilot project to help restaurants and local businesses get clientele back after a long lockdown period.

The project saw the city close off a street to all vehicles for one evening, allowing restaurants to put their tables in the street itself. On Saturday, the city brought the idea to Long Street.

The first edition of the idea took place in Bree Street in December. The turnout was good but the country was in the middle of the 4th wave. Additionally, the curfew was still place.

Fast forward to this weekend and with no curfew and COVID numbers dropping continuously, Capetonians turned out in their numbers to Long Street. People were dancing in the street and living their best life.

Security was tight too with Law Enforcement officials from the city seen walking up and down the road. There were no entry fees and the street was only re-opened to vehicles at midnight.

Jolling the economy back to life?

When asked about similar open-air events that won’t be party focussed, Hill-Lewis revealed that the City will soon begin trial events outside the CBD.

“We’ve had similar events in the last month in Bree Street from early afternoon, with kids games and jumping castles etc. Also in Harrington Sq, and soon moving to areas outside the CBD.”

ALSO READ – ‘The Constitution has FAILED!’ Sisulu fires back at Lamola in new letter

Hill-Lewis also says that he hopes events like these continue to provide a much-needed boost to businesses in the city.

It wasn’t all positive though. Some South Africans took to social media to note the lack of masks worn by some. Others asked how a street can be full but an open-air cricket stadium is not allowed any spectators.

When asked directly about the stadium situation, Hill-Lewis says he agrees completely that fans should be in stadiums.