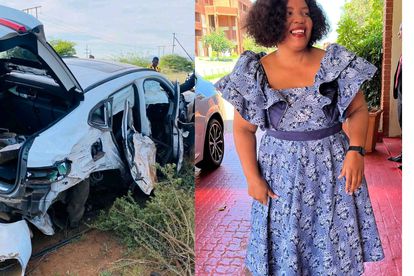 Limpopo MEC for Public Works, Roads and Infrastructure Nkakareng Rakgoale was involved in an accident involving a truck on Thursday, 1 December.

MEC Rakgoale, together with her protectors, were travelling from a government event when the accident took place. Fortunately, they all escaped unscathed.

The Department of Public Works, Roads and Infrastructure released a statement on the incident:

The Department of Public Works, Roads and Infrastructure has noted the accident involving the MEC Ms Nkakareng Rakgoale that happened on Thursday, 01 December 2022, on the R529 road between Lebowakgomo and Jane Furse.

MEC Rakgoale and the protectors were driving from a government event when an oncoming truck veered towards their lane, and collided with the MEC’s vehicle at the rear end, forcing the car off the road.

“The Limpopo MEC, her team and the driver of the truck were unharmed. However, they were taken to the hospital for observation.”

Meanwhile, in June this year, MEC Peggy Nkonyeni and her close protectors were involved in an accident after a tyre burst on the vehicle as they were travelling along the R66.

The MEC had just concluded an earlier engagement between the Premier and His Majesty the King Misuzulu kaZwelithini.
“MEC Nkonyeni was on her way to her next engagement in the Dannhauser Local Municipality, where she was going to launch the youth economic empowerment programme that will see more than 4000 young people employed by the Department of Transport,” the statement read.

The MEC and her close protectors were treated in hospital.

Then Premier Sihle Zikalala together with the Director-General Dr Nonhlanhla Mkhize, who were among the first people to arrive at the scene of the accident, ensured that Nkoyeni and her protectors were assisted and that they received urgent medical care.

ALSO READ: JUST IN: KZN MEC for Transport Nkonyeni involved in an accident