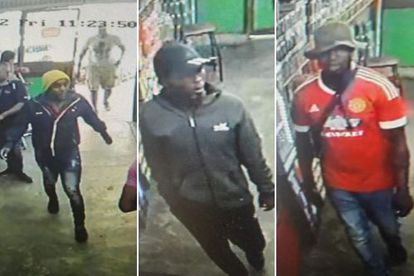 Four armed men to be on the lookout for. Photo: SAPS/ Facebook.

Four armed men to be on the lookout for. Photo: SAPS/ Facebook.

Four armed men are being sought by the police following their involvement in the robbery of a cash-in-transit guard who they disarmed and stole a trolley bag that happened to be empty.

It is alleged that on 23 September 2022, a G4S security official went to Palamine shop in Namakgale outside Phalaborwa to collect money.

“Due to technical problems, he was unable to access a safe and went back to the vehicle.”

While walking towards the G4S vehicle, the security official was allegedly accosted by four armed men who took an empty trolley bag and also disarmed him with a pistol.

It is also reported that the suspects fired several shots before fleeing the scene.

“No one was injured during the shooting but a customer’s vehicle was reportedly damaged.”

Police say it is believed that the people who are appearing in the pictures could assist the police with the investigation.

“Anyone with information about the people appearing in the pictures or knows the whereabouts of the suspects is requested to contact Detective Warrant Officer Doit Malebe on 083 338 2676 or Captain Aaron Masete on 071 351 7279 or Crime Stop on 08600 10111 or by using MySAPS app”.

Meanwhile in June this year, cops swooped in on a cash-in-transit gang that had plans to hit another risky big score.
On Thursday, 30 June, the TMPD tactical members with crime intelligence and other law enforcement officers responded to information received about suspects who were planning a cross-pavement robbery.

According to TMPD, the house of the suspects was identified in Atteridgeville. A C-class Mercedes Benz vehicle was seen leaving the house before the team arrived. The officers tactically approached the house and found four suspects. Inside the house, two military signal jammers were recovered, and one firearm and sets of number plates were also recovered.