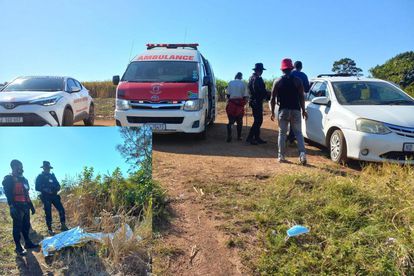 The teenager’s body was discovered on an unpaved pathway Sunday after a search party was launched by the family. Photo: RUSA

The teenager’s body was discovered on an unpaved pathway Sunday after a search party was launched by the family. Photo: RUSA

An 18-year-old male who was accused of stealing a cellphone in Nkangala, Inanda KwaZulu-Natal was found dead.

The teenager’s body was discovered on an unpaved pathway Sunday after a search party was launched by the family.

TEENAGER ACCUSED OF STEALING A CELLPHONE

Reaction Unit South Africa (RUSA) spokesperson, Prem Balram said they received a call for assistance at 09:27 after the teenager’s family located his body during a search.

“On arrival, RUSA Medics examined the teenager and discovered that he had sustained blunt force trauma to his body,” said Balram.

He further added that according to his family, three of the deceased’s friends arrived at their residence in eMzinyathi this morning at approximately 09:00 and queried if the teenager returned last night.

Balram said the friends informed his family that they were assaulted by members of the community after they were accused of stealing a cellphone.

“The three managed to escape, however, they were unable to locate the teenager thereafter. The boy’s family launched a search party and recovered his bruised and battered body in Nkangala,”

The deceased was a Grade 10 learner at Magqibagqiba Secondary School in eMzinyathi, added Balram.

Meanwhile, on Saturday a taxi driver was shot and killed during a robbery at the Mslasini Taxi Rank in Everest Heights.

A person known to the deceased loaded him into the taxi and drove to the RUSA offices.

RUSA Medics examined the individual and discovered that he had been fatally injured. He sustained a gunshot wound to his chest and right arm.

Furthermore, it is alleged that the deceased was seated alone in the minibus when he was approached by the suspect who produced a firearm.

Balram said the victim attempted to flee by jumping from his seat to the rear and exiting through the sliding door when two shots were fired. He collapsed a few meters away from the vehicle. The suspect fled with cash.