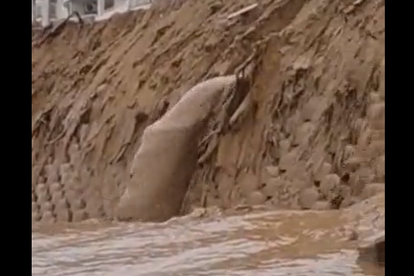 The eThekwini Municipality has warned residents to avoid at all cost the the North Beach Road in Umdloti, KwaZulu-Natal (KZN) as heavy rain is starting to wreak havoc in the province.

The entrance into Umdloti is flooded and from videos shared online by the eThekwini Municipality, mudslides can be seen gushing through homes in the area.

WATCH: FLOODS AND MUDSLIDES IN UMDLOTI

It looks like residents in the suburb of Umdloti will have to evacuate their homes once again as torrential rains continue to pour in KZN.

Initially, there was a yellow level 4 rain warning which was also increased to an orange level 5. Switching from a yellow to an orange warning means that more damage to infrastructure is expected, and the potential for fatalities is rising but red is more dangerous.

The weather service said widespread showers and thundershowers are expected across KZN as a result of a cut-off low associated with a surface high.

“Some stations have recorded significant rainfall amounts and models indicate accumulations of more than 20mm in some places along the KZN coast.

“Considering the vulnerability of some of these areas after recent events, severe impacts can be expected over areas and north-eastern parts of KZN on Saturday and Sunday.”

AREAS TO AVOID IN ETHEKWINI: