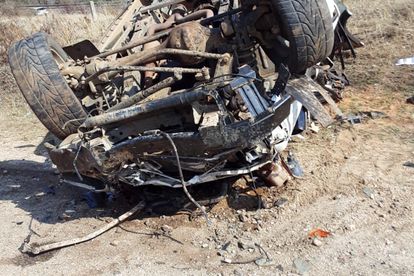 A bakkie rolled over on R71 left one dead and six injured.
Photo: ER24

A bakkie rolled over on R71 left one dead and six injured.
Photo: ER24

A man was killed after his bakkie plummeted down a cliff behind his home in Osindisweni, KwaZulu-Natal (KZN) on Saturday.

According to Reaction Unit South Africa (RUSA) they received a call for assistance at 18:14. On arrival, Reaction Officers were informed that the man and his 10-year-old daughter were returning from Verulam – KZN.

He reportedly turned into his driveway when the brakes on his vehicle allegedly failed while travelling down his steep driveway.

“His daughter jumped out of the Ford Bantam bakkie which plummeted down a sheer drop behind their home. The man was ejected from the vehicle which crashed nearly a kilometre at the base of the cliff.

“RUSA Medics navigated down the cliff and assessed the male. He was found to have sustained life threatening injuries and died prior to the arrival of First Responders. His daughter suffered minor injuries and did not require medical attention.”

A woman in her thirties was killed in a collision on Todd Street in the vicinity of Oaklands in KwaZulu-Natal (KZN) on Saturday.

The woman, who was driving a VW Polo , collided with a water tanker belonging to the eThekwini Municipality.

“It is alleged that the light motor vehicle was travelling in the direction of Redcliffe – KZN when it collided into a water tanker belonging to the eThekwini Municipality that was proceeding in the opposite direction. The occupants of the water tanker were not injured.”