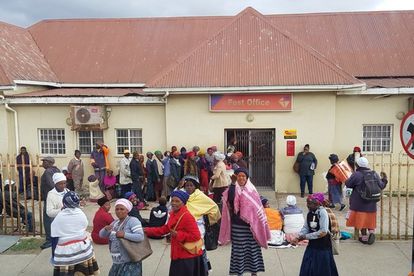 The community of Kimberley followed two suspects after they robbed the local Post Bank in Kimberley on Monday. PHOTO: Flickr

The community of Kimberley followed two suspects after they robbed the local Post Bank in Kimberley on Monday. PHOTO: Flickr

Community members in the Northern Cape followed and nabbed one of two bank robbers who stole more than R200 000 from their local Post Bank.

“The suspects pointed employees with what looked like a firearm and stole an estimated amount of R230 000,” Thebe said.

But it was the community that found and arrested one of the suspects. Residents followed the suspects and managed to find one of them at a nearby house not far from the Post Office.

“The suspect was found with an amount of R110 000 in his possession. He is expected to appear before Galeshewe Magistrate’s Court on Wednesday,” said Thebe.

The Hawks remain on the trail of the second suspected bank robber and investigations continue.

Head of Northern Cape Hawks, Major General Kholekile Galawe, commended the community for their assistance in grabbing the bank robbers.

“When the community and the police work together, the result is of mutual benefit and it is appreciated,” said Galawe.

Four metal dealing companies have been found to be illegally buying and distributing non-ferrous metals in Upington.

Four suspects, aged between 35 and 65 years, are expected to appear in court later this month for contravening the Second Hand Goods Act.

“Four companies, which are metal dealers, were identified and monitored over time. Telkom copper cables worth R111 146.70 were involved. Two companies are in Upington while the others are in Kuruman and Kimberly respectively,” Thebe said.

ALSO READ: Two robbers were taken down by their own victims

The companies were traced during a project-driven investigation launched in September 2019.

“Non-ferrous metal theft has been declared a national priority offence in South Africa, which results in the loss of substantial amounts of money by the government, state entities and the private sector. Theft of non-ferrous metals also cripples the essential services due to damage to essential infrastructure in the country,” said Thebe.