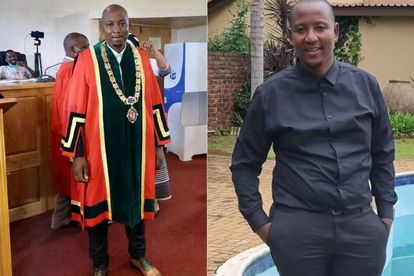 After allegations were widely shared online about Mayor Mthokozisi Simelane using public funds, he has come out to deny these claims.

It was alleged that the Mayor of the Mkhondo Local Municipality (Piet Retief) in Mpumalanga used exorbitant public funds in order to go to the Durban July and celebrate his birthday on the same weekend.

Simelane was voted in as Mayor of the Municipality after African National Congress (ANC) factions were unable to agree on their own candidate.

On Monday, 4 July, pictures of Simelane posing with pricy drinks went viral online. It was alleged that the mayor along with a few councillors and municipal officials planned and arranged a way to have fun in Durban, KwaZulu-Natal (KZN).

The plans coincided with the Durban July and this was allegedly done on purpose in order for the municipality to fully fund the trip. This funding included meals, hotel accommodation and transport as official expenses.

A note, posted online, alleged that the mayor, his partner and friends, were having fun with state funds – while community members have been in the dark and without water.

“Mkhondo local municipality council party in Durban while citizens are left in the dark and without water… Mthokozisi Simelane and the MLM council members are on an alleged … R700 000 ‘strategic planning workshop’ in Durban, KZN, from 29 June 2022 until 1 July 2022. This happened while MLM (Mkhondo local municipality) still owes Eskom R341 million and have not been paying their monthly account,”

Part of the note that went viral online read.

Speaking to IOL, Simelane stated that he celebrated his birthday in uMfolozi and that not a cent of municipality money was spent.

“The allegations are not true, On Saturday it was just my birthday which was celebrated in uMfolozi, not in Durban, not even (a) cent of the municipality’s money was spent on, basically it was private life,”