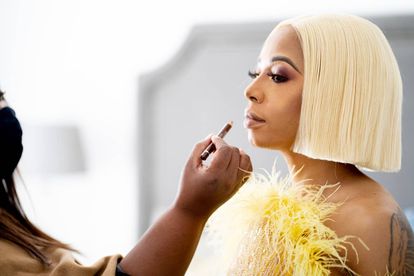 Kelly Khumalo’s lawyer Magdalene Moonsamy, in an interview eNCA, said her client does not know any one of the five accused that appeared in court for the murder of her former partner and Bafana Bafana goalkeeper Senzo Meyiwa.

This comes after a sensitive document was mistakenly leaked to the media by the National Prosecuting Authority (NPA) last week. The document claimed that Khumalo was allegedly in contact with one of the suspects which pointed to the idea that she hired a hitman.

Meyiwa was shot and killed in 2014 in Khumalo’s house in Vosloorus, however, nobody who was there has been able to paint a clear picture of what happened to the fallen goalkeeper for the last six years.

Khumalo has over time remained adamant that she had nothing to do with his murder. She has time and time again professed her innocence in the matter, however, the leaked document has the potential to muddy her claims.

WATCH: KHUMALO’S LAWYER CLAIMS SHE DOES NOT KNOW MEYIWA SUSPECTS

When eNCA reporter Pule Letshwiti asked Moonsamy if Khumalo knows any of the suspects who have been arrested, she said; “absolutely not” twice.

“The investigation, the statements, the events that unfolded have been thoroughly analysed by the police over the years but there is no knowledge of the five individuals,” she said.

“There is also the creation of fear and intimidation or imminent threats,” she said.

Referring to the leaked document, Moonsamy said it was malicious and was there to create sensationalism around an individual who has continuously been under perpetual harassment.

Letshwiti also said Khumalo has not been formally charged for the murder of Meyiwa. He also said that according to his sources, more arrests are expected to play out this week.

On 26 October 2020, Police Minister Bheki Cele addressed the media saying there had been a breakthrough in the Meyiwa case.

“The first five suspects have been arrested between 8:00 and 10:00 this morning in Gauteng and KwaZulu-Natal,” he said.

“The SAPS and the prosecution team are confident that we have a water-tight case against all five suspects,” he added.

One day after the arrests, Senzo’s mother Nthombifuthi Meyiwa had an interview with Newzroom Afrika. There, she mentioned being scared of Khumalo.