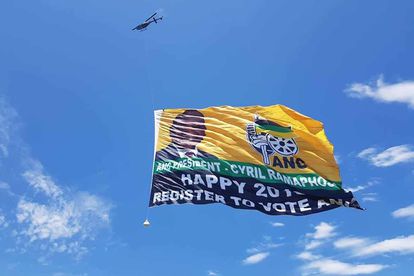 The ANC in KwaZulu-Natal kicked off its official 2019 provincial election campaign with a chopper-flown banner. Image: IOL

The ANC in KwaZulu-Natal kicked off its official 2019 provincial election campaign with a chopper-flown banner. Image: IOL

The Johannesburg High Court has ordered the ANC to pay a KZN-based company R102 million plus interest for election banners installed before South Africa’s 2019 general election.

Ezulweni Investments sought relief from the courts court in September last year after the ANC failed to pay for the installation of 30,000 PVC banners across the country.

The party was billed R2 900 per banner for installation and R70 for removal of each banner after the elections.

In its defence, the ANC argued that it had no obligation to pay the company because ANC Treasurer-General Paul Mashatile had not approved the installations.

However, Acting Judge U. Bhoola ruled that the company had proven that it had entered into a bona fide oral agreement with the ANC, adding that Ramdas provided WhatsApp messages proving that procurement officer Lebohang Nkholise had given the go-ahead for the installations.

Ezulweni’s lawyers, reportedly argued that officials Nhlanhla Mabaso and Nkholise were authorised by the ANC.

Based at Luthuli House, the ANC’s headquarters, finance manager Mabaso and procurement officer Nkholise agreed with Ramdas that his group would supply 30 000 banners.

The judge further ruled that according to evidence presented in court, Nkholise and Mabaso had authority to enter into agreements on behalf of the ANC.

Ezulweni’s court papers detailed meetings and WhatsApp communication between Ramdas, Mabaso and Nkholise discussing the progress of the banners’ production.

“Mabaso and Nkholise admit receiving the messages from Ramdas but deny that they responded to them,” Judge Bhoola said in her judgment.

“However, on… 27 April 2019 at 12pm Nkholise responded with a ‘thumbs up’ emoji, clearly indicating their approval for the 20 000 banners (that Ramdas said could already be made available).”

“The total cost is R 87m, R2,900 per PVC banner. This letter is accompanied by an invoice from Ezulweni Investments,” the letter reportedly stated.

The ANC did not immediately reacted to the ruling, but the news comes amid the party’s reported financial difficulties in recent months and frequent delays in payment of salaries to staff.

And just this Saturday, President Cyril Ramaphosa, who is also the president of the ANC ordered that his party pay back the cost of a recent trip to Zimbabwe during which an ANC delegation caught a lift on a government plane to meet their ZANU-PF counterparts.

Black, green and gold finances in the red?

It has also faced other lawsuits in the past over alleged nonpayment for services rendered.

In July 2019, a car rental company based in Ekurhuleni dragged the party to court to force it to pay R5.7 million. The payment was reportedly for 595 cars the ANC rented ahead of its NASREC conference in 2017.