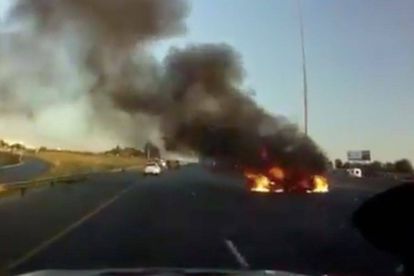 A CIT van was bombed on the N3 in Johannesburg on Saturday 27 August, with suspects still at large. Photo: Screenshot.

A CIT van was bombed on the N3 in Johannesburg on Saturday 27 August, with suspects still at large. Photo: Screenshot.

An investigation is underway and a manhunt has been launched after a cash-in-transit (CIT) van travelling on the N3 out of Johannesburg was bombed by a group of armed robbers on Saturday 26 September.

Members of the public clambered to retrieve cash that floated to the ground after the van exploded, with two security guards in the vehicle injured and rushed to a nearby hospital.

South African Police Service (SAPS) spokesperson in Gauteng, Lieutenant Colonel Brenda Muridili, said that the perpetrators made off with cash stolen from the van in a fleet of approximately four vehicles and are currently on the run.

“The incident took place at around 17:00 on Saturday 26 September between the London and Marlboro off-ramps,” she said.

“The Johannesburg Metro Police Department (JMPD) received information and went to the scene.”

She was unable to provide a great deal of information on the incident, with the investigation and hunt for the suspects ongoing, but said that an unknown number of suspects in approximately four vehicles made off with an undisclosed amount of money after attacking the van. No arrests have been made.

Muridili was unable to provide an update on the well-being of the injured security guards, but said that they remain in hospital.

Muridlili discouraged members of the public from taking advantage of attacks on CIT vans by collecting scattered cash in a frenzy, saying that the scene becomes contaminated and the task of collecting forensic evidence becomes challenging as a result.

“The cash van was apparently bombed and unfortunately the community was helping themselves to the money. They contaminate the scene. If you are found with cash from the scene, you will be liable for arrest,” she warned.

This is the latest in a spate of CIT robberies in Gauteng over the last week, with with five suspects fatally wounded and two arrested after police engaged in a shootout having tracked down a gang who robbed a van in Dawn Park, Boksburg, on Wednesday.