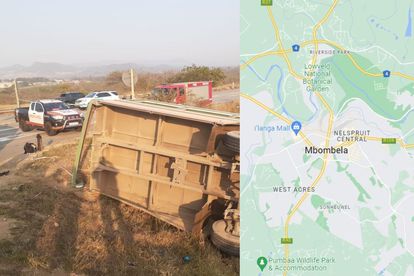 News JUST IN! Sixty people were injured in a bus accident on the R37 Lydenberg Road in Mbombela on Thursday morning.

According to Emer-G-Med emergency service spokesperson Kyle van Reenen, the accident took place at around 07:00 on Thursday morning.

“At approximately 07h00 on Thursday morning, Emer-G-Med paramedics responded to the scene of a bus crash on the R37 Lydenberg Road.

“On arrival on the scene, a passenger liner was found to have left the roadway and overturned.”

NO FATALITIES WERE REPORTED

“A total of sixty people suffered injuries ranging from minor to moderate and were treated and stabilized on the scene before being taken to various nearby hospitals for further medical care.”

Van Reenen added that no fatalities were reported.

On Tuesday, more than 100 people were injured in an early morning accident in Limpopo, when a bus overturned on the N1 highway.

According to ER24, the accident occurred at 3:30 on the N1, approximately 20 kilometres outside Louis Trichardt.

When paramedics arrived at the scene, the bus and a trailer were lying on the side some distance from the road.

“Scores of patients were found seated or lying around the bus,’ said a spokesperson. The injuries ranged from minor to serious and more than 100 people were hurt in the crash.”

A triage area was set up at the scene to allow paramedics from the various services that responded to the incident to treat the injured patients.

The patients were transported to nearby hospitals for further care and medical treatment.