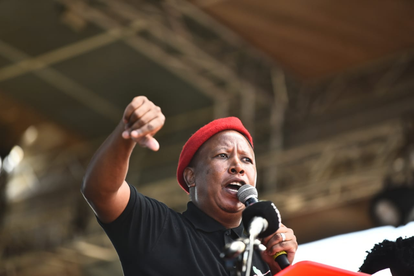 Economic Freedom Fighters (EFF) leader Julius Malema had a lot to say about the Sihle Zikalala water tanker saga upon his visit to KwaZulu-Natal (KZN).

Malema was visiting flood-ravaged areas in the province on Thursday. He touched on how Zikalala should be ashamed

In a clip shared online, a water tanker is seen outside the home of Zikalala in La Mercy. This after, a number of suburbs in KZN have been without clean water following the destruction caused by flooding.

The office of the KZN premier has since claimed the video was “digitally manipulated”. They also insist the premier arranged the tanker for the community.

Later Zikalala, claimed in a clip posted on the KZN provincial government’s Twitter account, that he had called on the water tanker to deliver water to his local community.

He added that his wife was using the water to cook meals for hungry residents affected by the KZN floods.

The La Mercy Civic and Ratepayers Association (LMCRA) issued a blistering rebuttal on Monday, revealing that witnesses who were nearby Zikalala’s home learned that the water tanker had actually been ordered to make an ‘exclusive delivery’ to the KZN Premier’s plush property.

During his visit to the province, Malema said what Zikalala did is exactly what “they” are known for.

“It’s not only Sihle, but we are unfortunately not able to expose them. There are many like that,” he said.

Malema also said the call for Zikalala to step down is an honourable one, anyone abusing the State of National Disaster should step down.

“Sihle is a failure, he is a thief and he steals our people’s water. What about the transfers of money that are not right in our faces, if he can steal a whole water tanker. He should be ashamed of himself, our people don’t have water.”