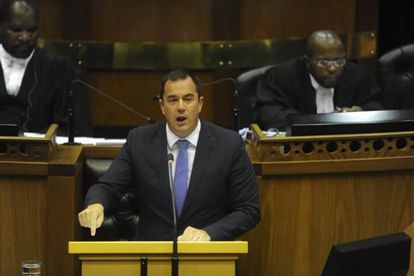 DA Chief Whip and one-man sass machine John Steenhuisen has given his reaction to the news that Jacob Zuma will be recalled.

Steenhuisen spoke to eNCA on Wednesday afternoon, and scoffed at the ANC’s attempts to remove Zuma from office. He promised that “Parliament would do the job” that the government can’t, and force JZ out of power.

Mr Steenhuisen also addressed the matter of the Budget Speech, set for Wednesday 21 February. He was aware that the decision to recall Jacob Zuma leaves Parliament pressed for time, but remained confident the issue would be resolved this week.

What John Steenhuisen said about the recall:

“All relevant matters will be discussed tomorrow. We are pushing the ANC hard. They’ve been generous in giving Jacob Zuma so much space, but it’s up to us to cut to the chase. We must now use the only institution with the constitutional power to remove Jacob Zuma, and that is Parliament.”

“Us in the National Assembly will do the job that the ANC can’t finish. We want him out of office before next week’s budget speech. Him taking a seat in Parly is a blow for South Africa, the ANC, and the country’s economy.”

“Those looking in at SA will be asking “whose budget is this?” should Zuma appear. People will wonder if all promises will be undone if Zuma is eventually crowbarred out of the leadership. We can’t continue like this, and only Parliament can take the decision.”

“We are looking to have the motion of no confidence in Zuma debated either on Thursday or Friday. There’s no reason we can’t elect a new President and proceed with the budget from next week onwards.”

Meanwhile, an urgent meeting for the chief whips of all the parties in Parliament has been scheduled for Wednesday at 08:00. The emergency forum is to discuss “recent developments” in the ANC, and to iron how the country moves forward.