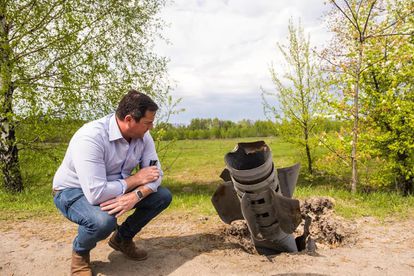 John Steenhuisen is the leader of the DA. But if you ask comedian puppet Chester Missing his thoughts? The opposition leader should instead be named John “Domhuisen”. Missing is particularly furious with the DA leader this time over his 6-day trip to Ukraine. According to the party, Steenhuisen is there on a “fact-finding” mission.

While Steenhuisen has already been getting roasted by many South Africans on social media over the trip, Chester Missing has now turned up the heat.

He posted a new video on Twitter getting at the question that many of us have been asking: Why go to Ukraine when there are so many problems here at home? And more importantly, do you go on fact-finding missions to Nyanga or Lavender Hill?

“I’ve just got some questions Johnny baby. Why don’t you go on a fact-finding mission to Palestine or Yemen? In South Africa, we literally have people sh*tting in buckets just kilometres from where you live. You didn’t take your cellphone camera and go on a fact-finding mission there did you? A coloniser going to complain about colonialism? If it was any richer, we would call it Johan Rupert.”

You can check out Chester’s full rant about John Steenhuisen in the video below.

The ongoing war in Ukraine and the DA’s visit

According to the Ukrainian government, anywhere between 9 500 and 24 500 civilians have been killed since Russia invaded Ukraine. The invasion began on the 24th of February and shows little signs of slowing down despite being over 2 months in.

John Steenhuisen is set to arrive home next week. The party says it will report back on how the devastation in Ukraine is set to affect South Africans.

The party has warned that South Africa now has a lot of work to do in preventing “deepening poverty as a result of the war in Ukraine.”