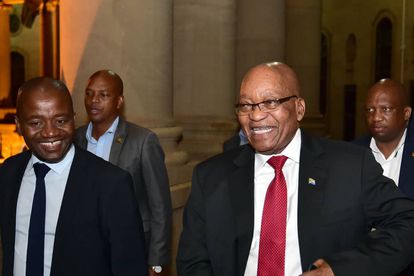 When it comes to former president Jacob Zuma and the courtroom, it has always been a tactic of delay, delay and delay again. And with the Zuma trial having often looked like it might never get underway at all, JZ has launched another appeal after not getting his way.

Zuma trial: Another appeal to get prosecutor removed

Zuma’s legal team have now filed papers to overturn Pietermaritzburg High Court Judge Piet Koen’s decision to dismiss his request to have veteran prosecutor Billy Downer removed from the trial. Downer has been working on the Zuma matter for decades. Unsurprisingly, the former president is not at all happy with Downer’s work.

Zuma now wants Koen’s decision heard before a full bench of the High Court, or before the Supreme Court of Appeal.

But the NPA seems to think that Zuma is now grasping at straws. The authority says that the application has no prospects of success or merit. It will oppose his application in court.

What did Billy Downer do?

Zuna insists that Downer has a personal vendetta against him and that he is not independent or impartial.

The former president has also laid criminal charges against Downer. Zuma insists that the prosecutor leaked his medical records to the media. According to Zuma’s spokesperson Mzwanele Manyi on the day the charges were laid, Zuma has submitted a whole file of evidence against Downer.

The Zuma trial is now expected to get underway in April 2022. Zuma faces 16 charges of fraud and corruption. These all relate to payments made for the 1999 arms deal.