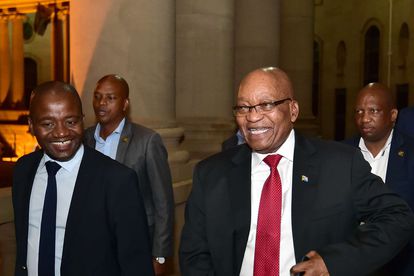 Former president Jacob Zuma is officially in prison but what does that look like? Minister of Justice and Correctional Services Ronald Lamola held a press briefing on Thursday morning, just hours after his arrest, and outlined the next steps. This included Zuma’s prison privileges and the dos and don’ts.

PRISON PRIVILEGES FOR ZUMA….WHAT DOES THIS INCLUDE?

Well before we get into his privileges, we should make it abundantly clear that Lamola said he would be treated just like any other offender. He went as far as saying that if they didn’t want him to be in prison, they would have put him up in a beautiful hotel in Umhlanga.

Not the case at all though…according to Lamola, Zuma is in the Estcourt correctional facility as of Wednesday night and although it’s not as comfortable as Nkandla, Zuma appeared to be in high spirits after having his breakfast and medication.

But coming back to prison privileges, the press briefing revealed that Zuma would in no way have his own security around him at the prison. It was said that the security would come from the facility itself.

“There will not be any designated bodyguards for the president,” an official said.

The department said Zuma would be in isolation for the first 14 days according to COVID-19 protocols. What will happen thereafter and whether he will still remain on his own or with other inmates, could not be divulged.

Zuma will also have access to television, however, he will not have access to a cell phone. It was made clear that he should make use of the public phones should he want to get in contact with someone.

“Wherever he is, there is a public phone so he will have access according to the classification that he is on,” another facility official said.

HOW MANY VISITS, PHONE CALLS?

While there are no contact visits allowed due to COVID-19, an official from the facility outlined what will happen.

“An offender that is categorized as a maximum, he has to get four visits per month and it’s inclusive of calls. We know that due to COVID-19, there are no contact visits so it will be counted as all calls that he will be subjected to,” she said.

While Zuma was expected to serve 15 months, Lamola said he will be eligible for parole after serving a quarter of his sentence.

“It should be noted that in terms of Section 73 (6 A) of the Correctional Services Act, an offender serving determinate or cumulative sentences of not more than 24 months, may not be placed on parole or day parole until such offender has served either the stipulated non-parole period or if no non-parole period was stipulated, a quarter of the sentence,” Lamola said.

Zuma can also apply for medical parole but there is a medical board that will check to see whether he qualifies. If he qualifies according to that body then yes, it may be possible.

“We want to assure all South Africans that Former President Zuma will be afforded dignity throughout his term of incarceration,” he added.