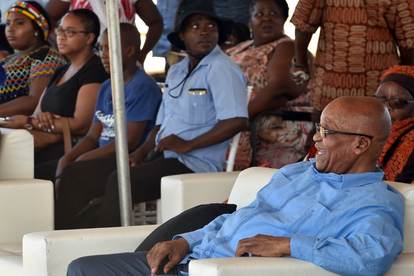 The ruling against Zuma has been viewed as provocation by the ex-president’s supporters. Image: GCIS/ Flickr

The ruling against Zuma has been viewed as provocation by the ex-president’s supporters. Image: GCIS/ Flickr

Jacob Zuma’s allies have warned that the former president’s imprisonment will provoke unrest. This follows the High Court ruling setting aside his ‘unlawful’ medical parole, ordering Zuma to return to jail in order to complete his 15 month sentence.

Subsequently, eThekwini councillor Ntando Khuzwayo says that the court is provoking the ex-president’s supporters. Above all, the politician vowed any attempt to cart Msholozi off to jail will be resisted by those who remain loyal to him.

“This is a provocation of the highest order which we are going to respond to. This judgment is clearly provoking us and we wish to warn that masses will respond to it. If someone is putting a finger in your eye clearly that person declares war on you,”

Additionally, Khuzwayo told Daily News that the decision compelling Zuma to pay costs was a clear sign of a vindictive legal system.

In his opinion, this served to support the long-held view that courts are abusing their power against Zuma.

Khuzwayo says that it is ‘bizarre’ that the embattled former statesman is now responsible for the costs involved despite not seeking parole himself.

The councillor is adamant that Zuma never applied for medical parole. In fact, he points out that Correctional Services had done so on the ex-president’s behalf.

The decision that Zuma’s time on parole will not be counted towards his sentence has also been met with contempt. Additionally, Khuzwayo questioned the move considering Correctional Services had monitored Zuma during this time.

The ANC in KwaZulu-Natal has requested permission to join the legal battle seeking to have the High Court ruling. Interestingly, the reasons provided were fears over the possibility of violence should Zuma be jailed.

This follows the Jacob Zuma Foundation confirming that it has appealed the decision and the ruling party in the province wants a slice of the action.