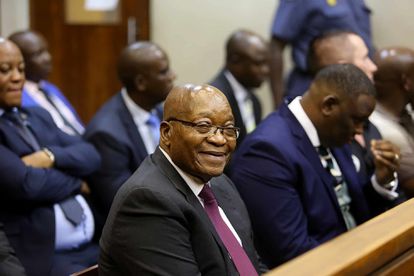 RANDBURG, SOUTH AFRICA  JANUARY 24: Former president Jacob Zuma is seen at the Randburg Magistrate’s Court, where he is supporting his son Duduzani who faces charges of culpable homicide on January 24, 2019 in Randburg – Photo by Gallo Images / Sowetan / Alon Skuy.

RANDBURG, SOUTH AFRICA  JANUARY 24: Former president Jacob Zuma is seen at the Randburg Magistrate’s Court, where he is supporting his son Duduzani who faces charges of culpable homicide on January 24, 2019 in Randburg – Photo by Gallo Images / Sowetan / Alon Skuy.

Jacob Zuma is back in the dock for the corruption case that’s rumbled on for the best part of 16 years. This week will prove to be one of the most vital in his life, as there’s a very real prospect that he could face a criminal trial. Thanks to eNCA, we’ve got a live stream of the whole event at the bottom of the page.

The state has to prove that there is no merit in the defence’s application for a stay of prosecution. Five days have been set aside, with a bench of three judges expected to come to a decision this week.

Lawyer’s for Zuma are expected to argue that the myriad of delays in this case has prejudiced the public’s opinion of their client and that there’s no chance of a fair trial anymore. Thales – the French arms company JZ is accused of acting in cahoots with – have made the same defence.

Don’t be surprised if you see JZ and his lawyers employ the same “delay” tactics we’ve become accustomed to seeing over the years, either. The longer this case drags on for, the less chance there will be of a 77-year-old Jacob Zuma ever facing accountability for his supposed actions.

Lawyers to do battle

Meanwhile, the prosecution are adamant that justice delayed has been justice denied. They’ll also be buoyed by the fact that six legal challenges have been made against this particular case, with none of them succeeding.

The magnitude of this case and its long, convoluted history means that there’s a lot to get through before the bench can come to a decision. Should they agree that Zuma must face trial, jail time would be on the cards. However, any decision made in Pietermaritzburg this week could be taken to the Supreme Court of Appeals or ConCourt.

You can catch all the developments via the live stream here. Proceedings get underway at 10:00.