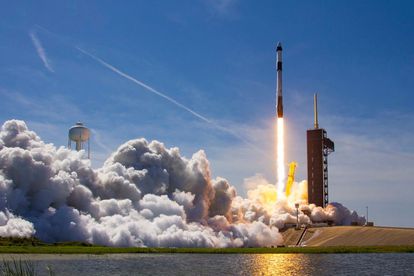 Ax-1, the first ever all-private human spaceflight, reached orbit at the International Space Station with the help of NASA and Elon Musk’s SpaceX. Photo: Flickr/Axiom Space

Ax-1, the first ever all-private human spaceflight, reached orbit at the International Space Station with the help of NASA and Elon Musk’s SpaceX. Photo: Flickr/Axiom Space

While others are accused of having their heads among the clouds with thoughts of lofty dreams, humanity has just accomplished a first for our civilization. Elon Musk’s SpaceX and NASA went beyond the clouds and reached the stars this weekend with Axiom Space. The AX-1 Mission has safely docked at the International Space Station (ISS) after a 21-hour voyage.

WHAT IS THE AX-1 MISSION?

Axiom Space’s Ax-1 mission is the first all-private human spaceflight to the ISS. A crew of four astronauts in the Dragon spacecraft from SpaceX were launched at the beginning of the weekend with the support of the company’s Falcon 9, a reusable two-stage rocket.

An Axiom Space spokesperson says the crew will live in the US quarters of the ISS for about eight days, participating in research and philanthropic projects.

Connor will collaborate with the Mayo Clinic and Cleveland Clinic in the US on research projects as well as instructional lessons to students from his hometown at Dayton Early College Academy.

Pathy is collaborating with the Canadian Space Agency and the Montreal Children’s Hospital who are helping identify health-related research projects to be undertaken during the mission.

As part of the Ax-1 mission, Stibbe will conduct scientific experiments from Israeli researchers and entrepreneurs coordinated by the Ramon Foundation and the Israel Space Agency.

The Ax-1 was supported through the close cooperation and coordination of SpaceX and NASA.

“On Saturday, 9 April at 8:29 AM Eastern Time, Dragon autonomously docked with the International Space Station. Falcon 9 launched the spacecraft to orbit from historic Launch Complex 39A at NASA’s Kennedy Space Center in Florida, the US on Friday, 8 April at 11:17 AM Eastern Time.”

READ MORE: ‘Next board meeting is gonna be lit’: Elon Musk teases role as Twitter ‘boss’