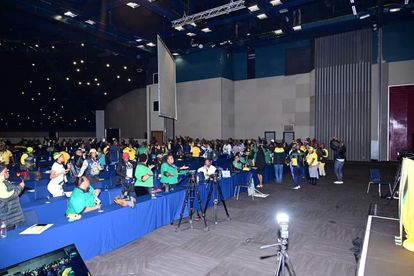 The ANC in eThekwini is holding its regional conference. And despite having “stepped aside” from ANC leadership, corruption accused Zandile Gumede is looking likely to be elected as the party’s eThekwini chairperson. Well, that’s if voting is ever allowed to get underway. Like most things the ANC does, it’s making life difficult due to members fighting their own factional battles. Things got so messy, that voting had to be abandoned during the late hours of Saturday night. With things set to wrap up today, here’s the latest.

Despite several hours of discussions, members could not come to an agreement over who should be allowed to vote. Those in the venue said the debate lasted more than eight hours. With no solution looking likely, the conference eventually adjourned at 4AM on Sunday.

The main issue here? Whether “regional task team leaders” are allowed to vote. There is also reportedly an issue over the inclusion of 13 delegates from the ANC Women’s League.

Gumede vs Nyawose – Corruption vs renewal?

Zandile Gumede is the former eThekwini Mayor and faces charges of fraud, corruption, money laundering and racketeering. The charges stem from a R340 million tender during her time in office.

The trial gets underway in July. But Gumede is currently focused on her main battle this weekend.

Gumede’s supporters are said to be pushing for the regional task team to get the green light. Nyawose’s group are opposing this as that has not been the norm in other regional conferences.

The debate is extra prickly, with the race currently being too close to call. As a result, who is allowed to vote could be key in deciding the victor.

Opening the conference yesterday, ANC KZN Chairperson Sihle Zikalala tore into former leaders over the inaction over radical economic transformation. It appears he may have also taken some shots at former president Jacob Zuma.