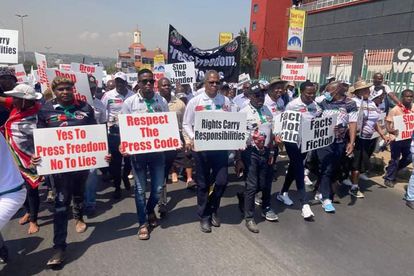 Following the IFP’s mass march to Media24 offices, the opposition party has thanked the media house for their reception.

IFP FILLS THE STREETS OF JOHANNESBURG

The IFP filled the streets of Randburg earlier today, 16 September wielding placards portraying messages that condemned the abuse of freedom of speech.

Led by the party leader, Velenkonisi Hlabisa, the crowd descended on Media24 offices to protest against City Press editor Mondli Makhanya who they accused of peddling lies about the party.

This follows Makhanya’s recent opinion piece about former IFP leader and Founder, Prince Mangosuthu Buthelezi accusing him of being a mass murderer whose sins have been overlooked.

In a statement, the party said:

“The Inkatha Freedom Party (IFP) would like to express thanks to Media 24, following a peaceful protest staged by the IFP outside the offices of City Press, which forms part of the Media 24 stable.
Both during the planning, as well as the protest itself, Media 24 was open to the IFP’s communication”.

“We appreciate that Media 24’s CEO, Mr Ishmet Davidson, was receptive and responsive to our correspondence and that Timothy Molobi (News Editor) and Gabriel Seeber ((Business and Production Editor) made themselves available to receive our Memorandum of Demands today.”

The party went on to say it hopes that they will be able to find a way forward together.

“We would further like to state that the IFP is not in any way against freedom of expression, or freedom of the press. As was made clear today, the purpose of our protest was to hold to account a member of the fourth estate – Mr Mondli Makhanya – who does not respect the responsibility he carries as a member of the press, to report, as per the Press Code, without any intentional or negligent departure from the facts,” the party explained.

“As the IFP, we would also like to convey our deepest thanks to all our supporters who joined the protest action today in an expression of their constitutional rights, and in the pursuit of truth, justice, and respect for the Press Code,” the party concluded.