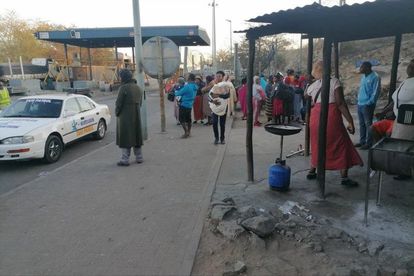 There are rumours that Zimbabweans trying to go back to their home country are turned back into South Africa. Photo: Bernard Chiguvare

There are rumours that Zimbabweans trying to go back to their home country are turned back into South Africa. Photo: Bernard Chiguvare

There are claims that Border Guards of the Department of Home Affairs are turning back Zimbabweans who are trying to get back home through the Beitbridge Border post. But according to the department, this is untrue.

It has been claimed that Zimbabwean nationals who reached the Beitbridge Border Post to return home are instead turned back into South Africa.

The Border Guards are directing the Zimbabweans wanting to go back to their home country to the relevant queues. This is so that they can be documented in accordance with the Immigration Act, he said.

“This means that they need to be fingerprinted and have their demographic details taken.”

Boarder Guards have received training on border control processes. This training includes the processes to follow when people want to leave the country but do not have the enabling documents, said Qoza.

“There is no way South Africa will refuse anybody from going back home. But similarly, South Africa can’t just allow anybody to move in and out of the country without it being recorded anywhere,” he said.

SOME ZIMBABWE NATIONALS ARE REFUSING TO BE DOCUMENTED

But it seems there are those that are against this system. Some have refused to be documented on their departure.

This is because they believe that since they are going back home, nobody should be asking them any questions at South Africa’s borders, said Qoza.

Minister of Home Affairs Aaron Motsoaledi said people can’t come in and out of the country as they please without being properly documented.

“Nobody will be allowed to just waltz through our brother to-and-fro without being documented. There are no exceptions in this regard, whether you go through a land port, seaport or an airport. This is regardless of your nationality,” Motsoaledi said.

The Home Affairs Department is appealing to the “propaganda mill to stop confusing people”.