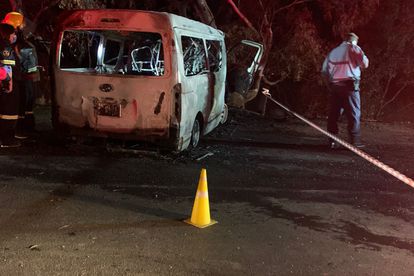 Six people were killed, and five others, including a child, were severely injured in a horrific accident when a taxi crashed into a tree and caught alight on Saturday evening.

“Paramedics from ER24 and Gauteng Provincial Government attended the scene of the horrific accident. The Westrand Municipality Fire Department extinguished the taxi, which was well alight.”

“They were assessed and treated on the scene before being rushed to nearby hospitals. An emergency medical helicopter was called to the scene to airlift the child to a hospital.”

He furthermore said there was nothing that paramedics could do for the six burnt victims.

“They were all declared dead on the scene. Local authorities attended the scene and will investigate the exact circumstances surrounding the incident.”

Meanwhile, a 50-year-old motocross rider was injured in a freak accident at a popular track in Bronkhorstspruit.

THE INJURED MAN WAS AIRLIFTED ON SUNDAY

“Paramedics arrived on the scene to find the man had been ejected over his handlebars, suffering spinal cord injuries.”

Advanced life support intervention was needed to stabilize him before he was airlifted to a nearby hospital for immediate definitive care.