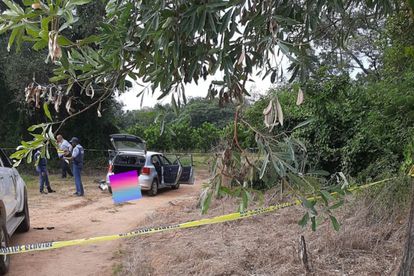 Two alleged robbers were killed by a hitchhiker on Thursday. Photo: SAPS.

Two alleged robbers were killed by a hitchhiker on Thursday. Photo: SAPS.

Two alleged armed robbers were shot and killed by a hitchhiker on Thursday morning, 5 May, after trying to rob him on the N4 road near Nelspruit.

South African Police Service (SAPS) spokesperson Colonel Donald Mdhluli said the suspects were driving in a silver-grey VW Polo towards Malelane when they passed the hitchhiker in Valencia outside the Nelspruit CBD.

“Apparently along the way, they diverted to Croc Valley farm where one of them reportedly drew a knife in an attempt to rob the man who was given a lift.

“Further reports indicate that the man also drew out his firearm and allegedly shot both men,” said Mdhluli.

One of the alleged robbers died at the scene while the other died a few meters away as he was being taken to a hospital. The dead men are yet to be identified.

The police opened a case of robbery with another weapon and two inquest dockets after being notified of the incident.

The firearm used by the hitchhiker has also been confiscated as part of the investigation along with the knife and the vehicle.

The police spokesperson said the preliminary investigation indicates that the vehicle may be linked to other armed robberies of hitchhikers at various hiking spots around Nelspruit.