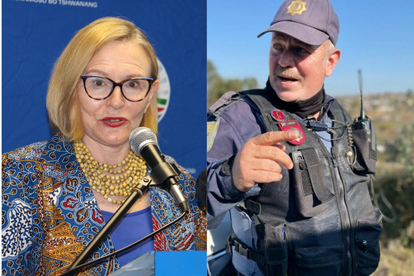 DA Federal Chairperson Helen Zille has weighed in on the killing of a KwaZulu-Natal police officer on duty, labelling the incident a tragedy. But the outspoken veteran politician has once again ruffled a few feathers on Twitter by comparing the cop’s killing with that of George Floyd.

Warrant Officer Michael Jameson was shot dead while attempting to prevent a hijacking in Umbilo, Durban, right in front of his daughter’s school. Jameson had been off duty and was picking up his child when he noticed the hijacking in progress. He then intervened and the suspects opened fire. Police say Jameson succumbed to his injuries at the scene.

“The late warrant officer died a hero as he died serving and protecting the people of this country. He indeed served with pride as he placed himself on duty and put the safety of his community before his own. Let me take this opportunity to pay gratitude to the deceased member”

YOU CAN ALSO READ: KZN police officer hailed a HERO after he was killed outside daughter’s school

Never one to hold back, Helen Zille says South Africans should be just as outraged by the KZN police officer’s killing, as they were when Floyd lost his life at the hands of police.

“Tragedy. There should be as much of an uproar about this in SA as there was about George Floyd. This typifies what structural violence means in our country,” Zille tweeted.

Floyd, an unarmed black man in the US, died after Derek Chauvin pressed his knee on his neck for over nine minutes. He eventually died, which placed sharp focus on police brutality and the killings of unarmed African American men, at the hands of law enforcement. It also led to a wave of anti-police violence and racism demonstrations across the world, including in South Africa.

The police had arrested Floyd after an employee at a convenience store claimed he had bought cigarettes with a counterfeit $20 bill. Chauvin was sentenced 22 years and six months in prison in 2021. Chauvin and the other three former officers – Tou Thao, J. Alexander Kueng and Thomas Lane – were fired the day after Floyd’s death.