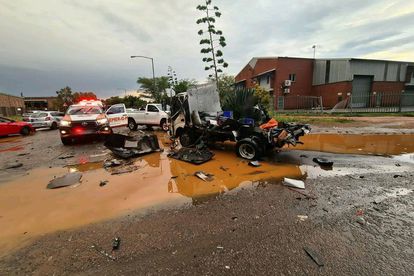 A guard was wounded when a cash-in-transit truck was blown up. Photo: Emer-G-Med.

A guard was wounded when a cash-in-transit truck was blown up. Photo: Emer-G-Med.

A cash-in-transit guard had to be airlifted to hospital after being wounded during a heist this evening, Friday, 25 November in Pretoria.

Earlier this evening Emer-G-Med confirmed that its paramedics responded to the scene of a cash-in-transit heist and bombing on Watloo Road in Silverton, Pretoria.

On arrival on scene the crews found the remains of the cash van which had been bombed by an unknown number of armed suspects.

“One of the guards sustained gunshot wounds and was in a critical condition.”

VICTIM TREATED AND AIRLIFED TO HOSPITAL FOR FURTHER CARE

Advanced Life Support intervention was needed to stabilize him before he was airlifted by the Netcare911 aeromedical helicopter to a specialist facility for the definitive care that he required.

In an unrelated incident, at around 17h00 on Wednesday evening, Emer-G-Med paramedics responded to the scene of a pedestrian-vehicle accident in the Randburg area.
Reports from the scene are that a VW Amarok struck two children, a seven and eight-year-old boy and girl.

“On arrival on scene, the kids were found to be in a critical condition. Emergency Care Practitioners used several advanced life support interventions to stabilize them before both were placed onto mechanical ventilators to assist them with breathing and airlifted to a specialist facility for the definitive care that they required,” Emer-G-Med reported.

The facts surrounding the incident and the events preceeding it are unclear and will form the subject of a South African Police Services investigation.