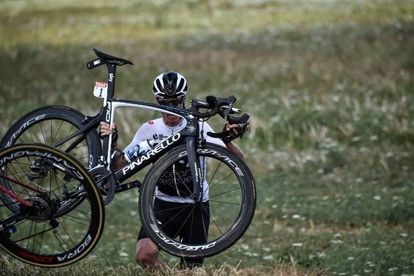 Great Britain’s Christopher Froome carries his bicycle after falling into a ditch in the last kilometers of the first stage of the 105th edition of the Tour de France cycling race between Noirmoutier-en-l’ile and Fontenay-le Comte, western France, on July 7, 2018. / AFP PHOTO / POOL / Jeff PACHOUD

Great Britain’s Christopher Froome carries his bicycle after falling into a ditch in the last kilometers of the first stage of the 105th edition of the Tour de France cycling race between Noirmoutier-en-l’ile and Fontenay-le Comte, western France, on July 7, 2018. / AFP PHOTO / POOL / Jeff PACHOUD

Update: The dashcam footage of the incident has been added below.

Froomey hasn’t had the warmest welcome at this year’s Tour de France, and now he’s gone and crashed on the first day, too.

As far as crashes go, it was pretty beginning. The British rider went flying over the barriers and landed safely on a grassy patch, relatively unharmed. He lost plenty of time, though, as the peloton went speeding off to try and join the sprint bunch on the final stretch.

Fernando Gaviria became the first Tour debutant to win on his opening day on the race since Fabian Cancellara claimed the prologue in Liege in 2004 when he took the Yellow Jersey He held off Peter Sagan and Marcel Kittel on the final stretch.

Here’s a look at that little tumble in slow-mo.

Watch: Chris Froome crashes on day one of the Tour de France

And here’s the dashcam footage of Froome’s crash

Froome expressed both relief and his usual quiet confidence after the race.

“We knew the first days were going to be tricky, what happened is part of the game,” said the 33-year-old who had a skinned knee and some possible bruising on his right shoulder after his head over heels fall.

“It was getting quite chaotic up at the front with the sprinters getting into position.

“There wasn’t much the team could have done for me,” he said after being accompanied across the line by Luke Rowe. I’m just relieved that I’m not injured.”

On a sunny Saturday early in the school holidays, enormous crowds of fans packed the holiday towns along the Atlantic coast in a highly festive atmosphere where any expected fall out from the Froome booing on Thursday was muted, with AFP reporting  just two signs along the roadside targeting him with messages of ‘Froome go home’ and ‘Froome the doper’.